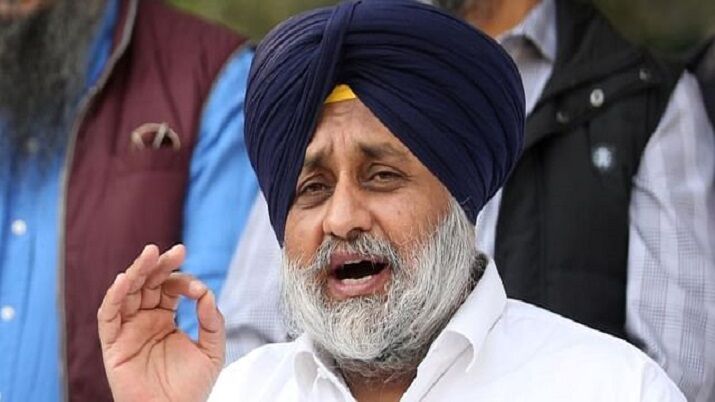 Chandigarh: Shiromani Akali Dal chief Sukhbir Singh Badal Friday slammed the AAP dispensation in Punjab over the "deteriorating" law-and-order situation, saying it seems there is no government in the state.

The entire AAP government is focusing on poll-bound Gujarat, while the people in Punjab suffer, he claimed.

Over the past six months, the state has witnessed loot and murder, Badal alleged, adding, "Gangsters are ruling the roost. Daylight robberies are happening, gangsters are extorting money from thousands of people and there is no control."

"No government exists in the state," Badal said, replying to a question on the law-and-order situation.

"Today, Punjab's situation is like an 'anari' (naive person) given a vehicle to drive. An accident is bound to happen."

He claimed the entire AAP government is "sitting" in election-bound Gujarat while "people in Punjab are being looted".

What could be worse than this? the SAD chief asked

The Bhagwant Mann government faced Opposition fire on Thursday following the killing of a Dera Sacha Sauda follower. They claimed the state has become the "terror capital" of the country.

Pardeep Singh, who was an accused in the 2015 sacrilege cases, was shot dead on Thursday by six assailants in Punjab's Faridkot district.

"Never in the history of the state has law and order descended to this level as under this Aam Aadmi Party government. It seems 'jungle raj' is prevailing in Punjab with targeted killings and extortions becoming the norm and gangsters being allowed free reign.

"Since the chief minister is directly responsible for this state of affairs he should own responsibility and step down," Majithia said.

He claimed there were extremely dangerous implications to the "ongoing breakdown" in the law and order situation.

"A sharp increase in smuggling of weapons into the state has compromised national security. Daily killings and the new culture of extortion whereby no businessman is safe, are resulting in the fleeing of capital from Punjab. No investment is coming in and with home investors also choosing to move out we are staring at an economic collapse as well as a burgeoning unemployment crisis," he alleged.