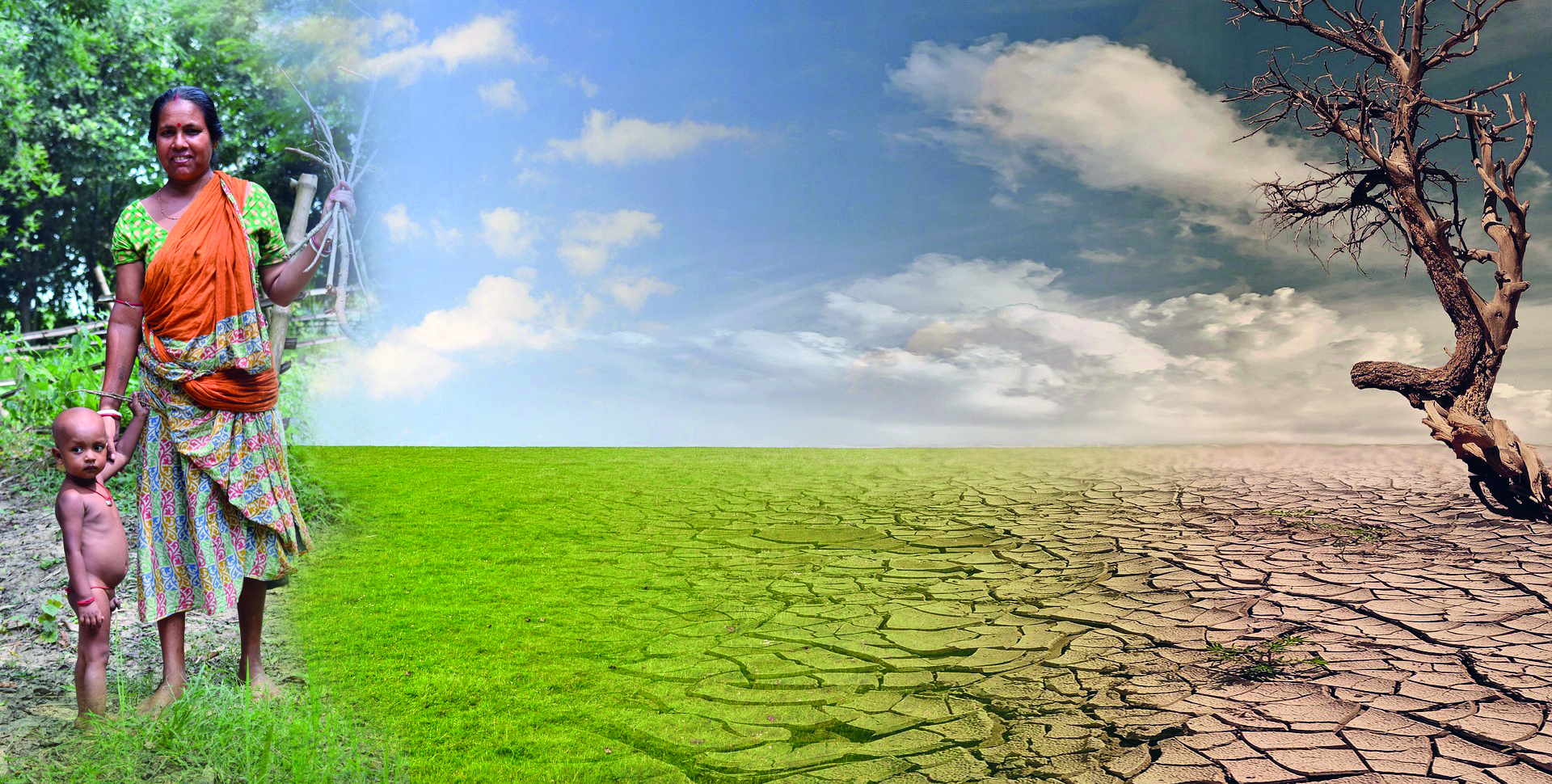 Though climate change impacts all individuals, women and girls are found to be more vulnerable to its ill effects in light of persisting gender inequalities that are found to be widely entrenched within Indian society. Their vulnerability stems from several underlying socioeconomic, physiological and cultural factors, and this comes as a consequence of their dependence on natural resources, resulting from their traditional roles and responsibilities in looking after their households.

Despite this, there is minimal participation by Indian women when it comes to decision-making activities concerning resource governance. Consequently, they are less able to confront the severe health impacts brought forth by the challenges of climate change – a matter of emerging concern that ought to be given more serious consideration in terms of policy-making.

In comparison to their male counterparts, women spend a larger portion of their time performing domestic chores. This places them near standing water and exposes them to mosquito breeding grounds. The Socio Economic and Caste Census of 2011 reveals that women comprise around 48 per cent of India's rural population. Women in large numbers in the rural pockets of the country stand at greater risk of contracting vector‐borne diseases, given their exposure to rivers and ponds while fetching water supplies for their households.

In addition to this, women and girls stand exposed to pathogens and other toxic compounds found within the contaminated flood waters. A dearth of clean water supply and inadequate sanitation infrastructure further pose serious health challenges to women and girls, especially during the time of menstruation.

In the wake of the recent Assam floods, the spread of water-borne diseases like dysentery, diarrhoea and severe skin infections were found to be quite rampant. A study by Smile Foundation goes on to explain how this came to be mired with the deadly outbreak of Japanese Encephalitis — a mosquito-borne viral infection, found to be quite common in the state's relief shelters — and severely affected expectant mothers and new-born babies in the process.

As climate change goes on to trigger extreme weather events like heatwaves and poor air quality, prolonged exposure to such weather patterns also contributes to the vulnerability of pregnant women. As climate change brings forth meteorological changes by reducing the water quality, it carries with it large health implications, especially affecting the health of women and children. It could also bring further complications such as congenital birth defects and stillbirths. In this regard, climate change creates an environment which is not conducive to development during the prenatal period.

Also, over time, more and more women have developed severe respiratory conditions, especially in India's rural pockets where renewable energy remains an unavailable facility, and women are compelled to use hazardous cooking fuels such as traditional biomass, kerosene and firewood, which in turn causes them to inhale toxic pollutants regularly.

Every year, paddy straw burning practices in Delhi's neighbouring states like Haryana, Punjab and Uttar Pradesh create hazardous pollution levels in the capital city, with this year standing as no exception. As reported by DNA India, Delhi hospitals recorded a 25 per cent increase in respiratory illnesses within the capital city, with women and children amongst the worst affected.

Bouts of food insecurity and malnutrition

Changes in rainfall and temperature patterns trigger large impacts on human health. Of such impacts, food insecurity remains a primary concern that must be combated.

Women, especially, are largely sensitive to the impacts of food insecurity and resulting nutritional deficiencies, against the backdrop of their increased nutritional needs during their menstrual cycles and pregnancies.

There have also been several instances where women have skipped meals to feed the other members of their family in times of food scarcity, and have travelled to great extents to secure water and fuel for their households. With the onset of climate change, natural disasters are now a recurring phenomenon and have constrained the abilities of women and girls to collect food for their families. This has left them increasingly vulnerable to bouts of food insecurity and malnutrition.

Climate change has triggered large-scale rural out-migration in Uttarakhand by affecting agricultural productivity in the past two decades. Scroll.in reported that high dependency on depleting natural resources has given rise to prevailing poverty and food insecurity, further enhancing the vulnerability of women and children in the process; and has also led to poor community health overall, within the Himalayan stretch.

The Intergovernmental Panel on Climate Change holds that rapid climate change has a severe impact on one's mental health. It triggers issues of emotional distress, anxiety, and depression, affecting an individual's psychological well-being in the long run. In dire situations, it could even trigger suicidal behaviour among some.

Mental disorders connected to climate change include congenital defects, mental disorders and neurological disorders. Furthermore, the severity of mental illness among migrants and refugees is found to be higher than among the residents of a certain place. For instance, migrant women who could be suffering from prenatal depression, also have to deal with trauma and anxiety as additional stressors that come with displacement.

A 'Forced Migration Review' study in collaboration with the University of Oxford, revealed that Ghoramara islanders in the Sundarbans delta showed signs of displacement-induced trauma and climate-related distress after being forced to relocate from their place of origin to Sagar Island. In fact, the female islanders emphasized on the immediate need to conduct gender-sensitive analyses of the impacts that they have to face as a result of seasonal migration and forced displacements.

Pregnant women who have given birth in the wake of natural disasters have more often than not, had to face pregnancy-related complications such as stillbirths and uterine bleeding due to inadequate facilities at the makeshift relief shelters. Such shelters also often lack adequate infrastructure and provisions to cater to the menstrual concerns of female migrants. This is something that must be immediately addressed since it is a known fact that women and girls could spend up to several months in relief shelters, depending on the flood situation.

Poor menstrual hygiene could lead to reproductive tract infections, causing infertility in the long run. Improper sanitation infrastructure in relief camps compel all camp-dwellers, including women and girls, to engage in open defecation, something which breaches their sense of privacy, given the congested living conditions. Such practices also lead to the faecal contamination of water, which in turn depletes the water quality and accentuates the risk of reproductive diseases like urinary tract infections and bacterial vaginosis.

Plan India, a non-profit organization in collaboration with the United Nations Population Fund, reported that the menstrual woes of teenage girls and women accentuated with limited access to sanitary pads, and lavatories being submerged under floodwater during the Bihar floods. In addition to this, the lack of toilets and clean water supply compelled female camp-dwellers to wash the cloth fabric with unclean water, further accentuating the risk of diseases and infections within congested living conditions.

Concerning disaster-related evacuation, public warnings have often failed to inform women who remain confined within the four walls of their homes. More often than not, it is their lack of education and awareness that constrains them from gaining awareness regarding the understanding of climate change and its after-effects, and taking up appropriate steps to protect themselves and their children, in the event of natural disasters like cyclones, floods and landslides.

It becomes important to note that women are not just vulnerable to the impacts of climate change, but can also function as key agents of change towards climate change mitigation. Given women's primary role as caretakers, generating awareness among them, and making them aware of the ill effects of climate change, can enable them to come up with long-term sustainable decisions which take into account the needs and interests of the health of future generations.

Inclusivity in climate change-related policy planning, decision-making and implementation charts pathways for gender equality and women empowerment. By mainstreaming gender into climate adaptation and mitigation activities, specific health vulnerabilities faced by women and girls with regard to climate change can be effectively dealt with. Thus, it is essential to identify and adopt gender-sensitive strategies in response to securing gender-specific health needs, in light of the environmental and humanitarian crises triggered by the ongoing climate change.