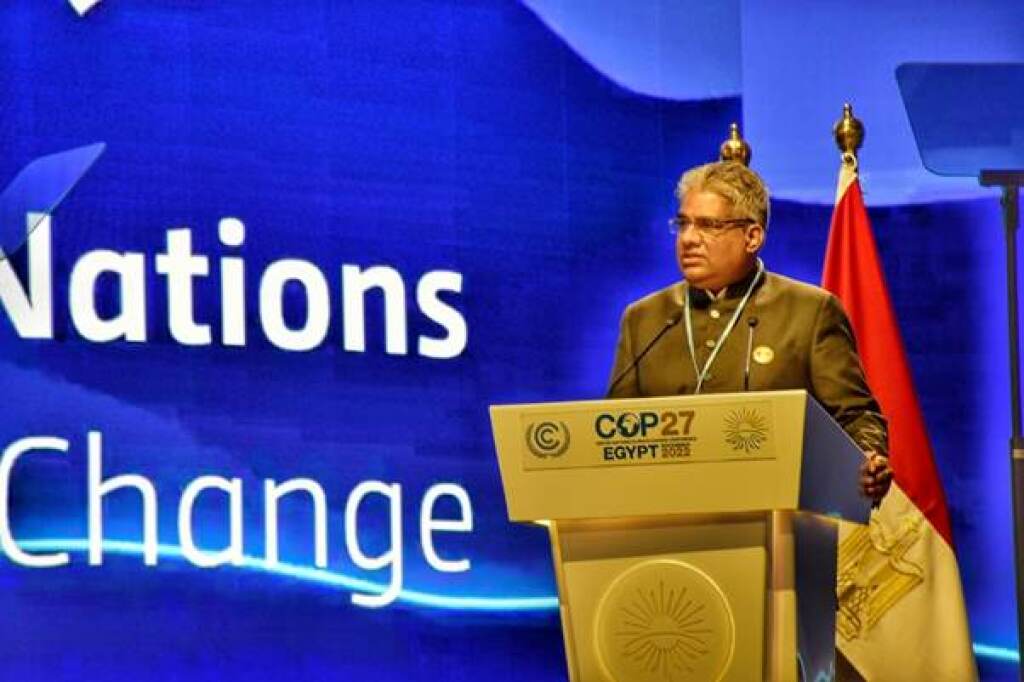 India is happy with the creation of a loss and damage finance facility for developing and vulnerable countries at COP27 in Sharm El-Sheikh; however, the country will not give any funds to such a facility but would rather claim them, the Centre said November 20, 2022.

India is also not very happy with a few other conclusions in the final text reached after intense negotiations. These include agriculture, which the country does not want clubbed with climate mitigation, and the issue of just transition.

Union Minister for Environment, Forest and Climate Change, Bhupender Yadav, told Indian journalists at the close of the year's most important climate meeting:

We are happy with the setting up of the loss and damage financial facility in Sharm El-Sheikh and the inclusion of issues regarding sustainable lifestyle which we consider to be of paramount importance.

He added that India also welcomed the inclusion of sustainable patterns of consumption and production in the efforts to address climate change in the cover decision.

Yadav, however, said there was no question of India providing any funds to the proposed loss and damage facility as it was the responsibility of a developed country. He also said India will seek money from the fund since it is one of the most climatically affected countries in the world.

The minister pointed out that agriculture should not be clubbed with mitigation, reiterating a long time stand of India.

"We note that we are establishing a four-year work programme on climate action in agriculture and food security … Agriculture, the mainstay of livelihoods of millions of smallholder farmers, will be hard-hit from climate change. So, we should not burden them with mitigation responsibilities," Yadav stated.

Incidentally, India has kept mitigation in agriculture out of its nationally determined contributions.

European countries have long been trying to link methane release from the agricultural process in India, particularly from manure and gastroenteric releases of livestock. They have been demanding a mitigation overhaul like changing the feed of livestock.

Yadav also tried to unlink just transition from coal phaseout. He stated that "for most developing countries, just transition cannot be equated with decarbonisation, but with low-carbon development".

The Sharm el-Sheikh Implementation Plan, the final text, has proposed to establish a work programme on just transition. "Developing countries need independence in their choice of energy mix, and in achieving the SDGs (sustainable development goals)," added the minister.

India made an intervention on November 18 during negotiations to restore the coinage of 'coal phasedown', which the earlier text changed to 'coal phaseout'. This is almost a replica of what had happened at COP26 last year in Glasgow.

In COP27, India demanded that only coal could not be singled out and that the phaseout of all fossil fuels should be addressed. That did not happen. But India could at least hold on to the status quo.

"Unfortunately, the final text merely keeps the processes alive till the next COP. While a notional funding arrangement for L&D has been agreed upon, its shape and scale are far from clear," RR Rashmi, a distinguished fellow in TERI and a formal national negotiator, said.

"At COP27, India negotiated from a position of strength and ensured that the debate moved from coal phaseout to fossil phasedown," Pallavi Das, a programme associate in think-tank CEEW, said.

It was nearly 36 hours after the scheduled deadline that all 200 countries agreed to the Sharm El-Sheikh Implementation plan; which, among others, included the creation of a loss and damage fund.

The 13-page-long statement, covering 93 points, states in the section under the subhead Loss and damage that it "welcomes the consideration, for the first time, of matters relating to funding arrangements responding to loss and damage associated with the adverse effects of climate change …under the conference of parties (and) Paris Agreement."

Though there is no deadline being provided for its operationalisation, the COP27 president, Sameh Shoukry earlier said the operationalization should be done in COP28, "in November-December of 2023".

Climate experts this reporter spoke to, welcomed the decision to set up a loss and damage facility

"With the creation of a new Loss and damage fund, COP27 has given a warning shot to polluters that they can no longer go scot-free with climate destruction and from now on, will have to pay up for the damages they cause and will remain accountable to people who are facing supercharged cyclones, devastating floods and rising seas … like the hapless people in the Sundarbans," said Harjeet Singh, head of global political strategy, Climate Action Network International.

"The decision to establish the loss and damage fund is a historic outcome, and another significant step on the long road to end climate injustice," Sandip Chachra, executive director of ActionAid India, said.

Already, there has been movement on the newly setup funding mechanism with several countries making financial pledges on loss and damage. Countries like Austria, Belgium, Canada, France, Germany, New Zealand, Denmark and Scotland have made such pledges.

"We heard the calls (of vulnerable people), and we responded. Today, here in Sharm El-Sheikh, we established the first-ever dedicated fund for loss and damage … Millions around the globe can now sense a glimmer of hope that their suffering will finally be addressed, swiftly and appropriately," Shoukry said while speaking in the closing plenary. DTE