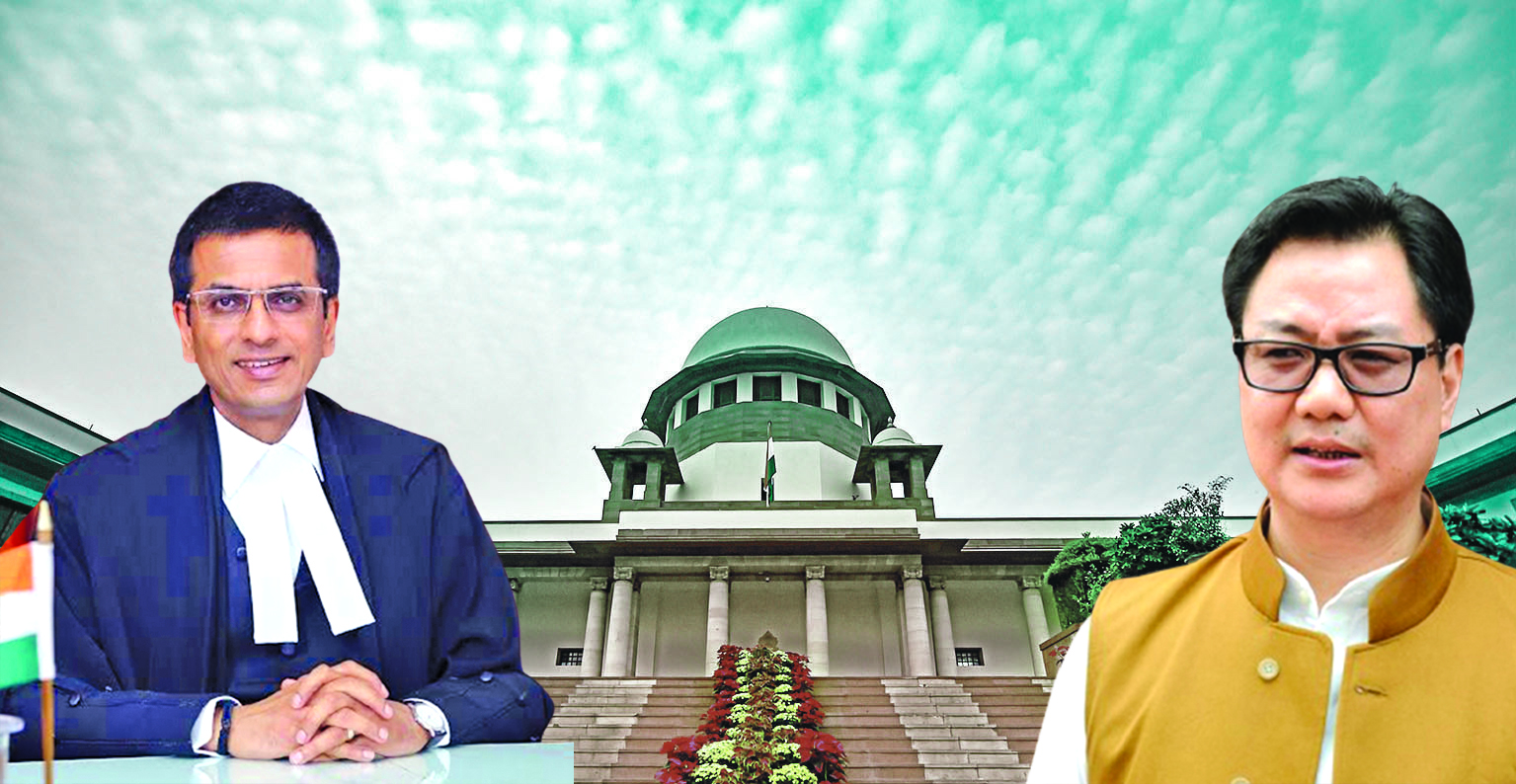 For the last few days, people have been keenly witnessing the proceedings of the Apex court and the acerbic comments made by a Constitution bench on the appointment of Arun Goel as the Election Commissioner (EC). The bench criticised the appointment, saying it was made in a 'tearing hurry', and questioned the process and criteria adopted by the government in shortlisting the candidates. The court said that Goel's appointment to the post of EC just a day after his resignation seems questionable. This is for the first time in recent history that an Attorney-General in R Venkatramani forcefully, yet very politely, reminded the bench not to cross the 'Laxman Rekha' and refrain from questioning the routine decisions of the Executive. Venkatramani also asked the perpetual anti-establishment litigant, advocate Prashant Bhushan not to interfere in between Attorney-General's arguments. The SC had reserved its decision on the petition for the appointment of an Election Commissioner. This issue has, however, again opened the door for the possible escalation of conflict between the Executive and the Judiciary. Let us examine it from the point of view of harmony between the two wings of the government. It appears that the Central government is now reacting to the increasing overreach of the Judiciary in the domain of the executive.

The executive powers of the Union are vested with the President and are exercised directly or through the subordinate officers in accordance with the Constitution. The President is advised by the Executive, headed by the PM. The Executive is responsible for the implementation of laws and policies adopted by the legislature. All appointments of civil servants and members of the judiciary are made by the President. Going by the Constitutional provisions, the government is within its right to make any appointment at any time, provided the stipulated qualifications and other norms are adhered to. Experts argue that the SC could subsequently hear any litigation by any aggrieved party on such appointments, and then it can summon the file, but making a 'suo motu' statement without going into its entirety was an extraordinary step taken by the judiciary.

R Venkatramani, as Receiver of the Amrapali case, had done a great job in providing justice to thousands of flat owners with his skills in garnering funds for NBCC which was tasked with the completion of the project by the SC. He is in an unenviable position to bring both the Executive and the Judiciary to a common ground in the interest of Constitutional governance.

However, analysts are of the opinion that the ongoing controversy may be a fallout of the recent war of words between the judiciary and the government. It was an article by Kiren Rijiju, the Union Law Minister, on the collegium system of appointment of HC and SC judges that seems to have irked the judiciary. The SC, in 2015, had turned down the National Judicial Appointment Commission Act (NJAC) which proposed to set up a new mechanism for the appointment of judges in the HCs and the SC. Rijiju was a member of the committee headed by the CJI. He argued that judges appoint judges, and hence, the appointments made are not fair and are based on plain acquaintance rather than merit. The new CJI, DY Chandrachud, responded to the article, saying he is open to reforms. While he is open to reforms, his predecessor, UR Lalit, responded by saying that the collegium system is fine and needs no reform. The SC had objected to the Law Minister's remarks and questioned the government for sitting over the recommendations of the collegium.

This fracas has become a topic of discussion in the country today. The Constitution clearly says that all appointments should be made by the President, which unequivocally means the government. However, in doing so, the government has to strictly adhere to the norms and qualifications. But it is equally true that for the past many decades, the spirit of merit has given way to a tendency to appoint favourable persons to important positions in the bureaucracy. Notably, both in the UPA as well as in the NDA governments, cabinet secretaries have been getting extensions for several years, as if no suitable IAS or, for that matter, any other civil services officer is available to hold the position. What else could be compelling the government to grant such extensions, except the practice of crony capitalism and demoralising good officers down the line?

Similarly, the hurry shown in appointing the EC is also questionable in a democratic set-up where equity and fairness in the appointment process are necessary.

The experience has been contrary to date as, for the past 75 years, all governments in power have appointed their cronies to such positions, though there have been exceptions. Post-retirement allurement is a big incentive for the plaintiff civil servants. Because of this, there is a scramble among officers to get closer to political power; and owing to their proximity to the seat of power, many senior officers, depending on their values and character, have been able to encash these opportunities. In my book, 'Quest for Civility', I've rooted for large-scale reforms in all three wings of the government.

Now, on the question of disenchantment of the SC with the collegium system, it is also a fact that judges are to be appointed by the President on the recommendations of the CJI, as provided under Article 124(2) of the Constitution, and followed till 1993. There was no Constitutional provision for the collegium system until it was introduced by the Supreme Court itself, making its recommendations 'fait accompli' for the government. The original powers of the SC do not cover government appointments; it can only hear writs on appointments, though Article 32 of the Constitution gives an extensive original jurisdiction to the SC regarding the enforcement of Fundamental Rights and also under the doctrine of Public Interest litigations. At the same time, the SC, as the third wing of the government, is responsible for the smooth governance of laws. While the law minister accuses judges of appointing judges, it is also true that, virtually, the IAS officers' committees appoint IAS officers. The only difference is that the ministers can overrule their recommendations but it seldom happens for obvious reasons. Had the Executive exercised its duties in the fields like environment and in the Amrapali case, there would have been no need for judicial activism.

In a nutshell, both the government and the judiciary have some points to make. In the present situation, the role of the Attorney General in bringing the coordinated functioning between the government and the judiciary back to normal assumes importance. On appointments, the government must be fair and go for reforms as it had criticized many appointments while in the opposition. In the collegium system, the need for reforms should rest on the views of the CJI. It opens a window for conciliation.

The writer is Chairman of Centre for Resource Management and Environment. Views expressed are personal