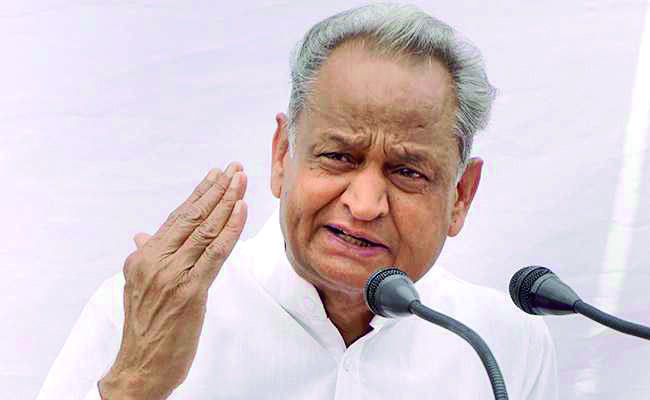 New Delhi: Rajasthan Chief Minister Ashok Gehlot on Thursday said Sachin Pilot is a 'gaddar' (traitor) and cannot replace him, drawing a sharp response from his former deputy who said such "mud-slinging" would not help, in an escalation of their rift just days ahead of the entry of Rahul Gandhi's 'Bharat Jodo Yatra' into the desert state.

Gehlot also said Pilot had revolted against the Congress in 2020 and alleged that he tried to topple the state government.

Pilot hit back at Gehlot to say it is unbecoming of his stature to use that kind of language to attack him and make completely "false and baseless" allegations.

As the war of words signalled the widening fissures in the ruling party in Rajasthan, where Assembly polls are due next year, the AICC stepped in to do some damage control, saying Gehlot's differences with Pilot would be "resolved" in a manner that strengthens the party.

In a statement, AICC general secretary communications Jairam Ramesh asserted that the focus right now should be on ensuring the success of the 'Bharat Jodo Yatra'.

Gehlot alleged that Union Home Minister and senior BJP leader Amit Shah was involved in Pilot's rebellion when some Congress MLAs loyal to him were holed up in a Gurugram resort for more than a month and Union minister Dharmendra Pradhan visited them often, claiming that he has proof that an amount of Rs 10 crore was paid to each of those legislators, including Pilot.

Rajasthan BJP chief Satish Punia denied the charge that the saffron party was involved in paying money to Congress legislators in 2020 to defect.

Pilot also denied the charges of money changing hands, saying the allegations are "false and baseless".

Gehlot said the Congress can replace him with any of its 102 MLAs in Rajasthan except Pilot if the top leadership feels that the prospects of the party would improve in next year's Assembly polls.

"The MLAs will never accept someone who has revolted and has been dubbed as a gaddar. How can he become the chief minister? How can the MLAs accept such a person as the chief minister? I have proof that Rs 10 crore each were distributed to the MLAs holed up in a Gurugram resort for toppling the Congress government in Rajasthan," Gehlot told.

He said one will never find an example where a party president "tries to topple his own government" and had to be sacked both as state party chief and deputy chief minister.

Asked if Pilot can still replace him if the high-command decides so, Gehlot said it is a hypothetical question. "How will that happen? That cannot happen," he said.

The remarks came at a time when campaigning for next month's Gujarat Assembly elections is at its peak and Gehlot is the senior observer for polls there.

Responding to the chief minister's attack on him, Pilot said "name-calling, mud-slinging and accusations that are going around are serving little purpose", adding it is time to unitedly fight the BJP and strengthen the Congress.

Pilot, who walked alongside Rahul Gandhi and Priyanka Gandhi Vadra in the Bharat Jodo Yatra in Madhya Pradesh, said he would never use such language and asked the chief minister to focus on the assembly polls in Gujarat.