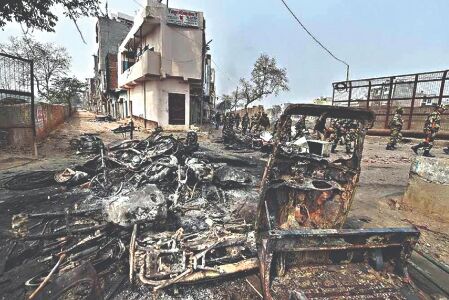 New Delhi: From 10 days to at least a month — the vast gaps between police personnel claiming to "witness" crimes during the north-east Delhi riots last year and the time they recorded this officially, has prompted courts in the city to seriously doubt the credibility of these statements as evidence in cases related to the riots, according to an analysis of 100 bail applications granted over the last one year.

Over 3,500 bail applications have been allowed since the investigation of the riots began.

Millennium Post's analysis showed that in the 100 bail orders, the most common bugbear courts have had with the Delhi Police's investigation into the riots pertains to the untrustworthiness of statements by police witnesses and complainants along with others cited as public witnesses in these cases.

Many a time, a public witness would not be able to identify an accused in one particular case, but a few weeks later would identify the accused, implicating them in a separate case. In most cases, police statements were found to be recorded under Section 161 of the CrPC, making them inadmissible as evidence.

Of these 100 bail orders, it was revealed that in 56 cases, the statements of eyewitnesses (public witnesses) or beat constables were cited as incriminating evidence of the accused's role by the prosecution — naming and identifying them. And of this, in 34 cases, courts have cited the time gap between a cop witnessing the crime and reporting it to rule their statements as "inconsequential". In many of these cases, courts asked what stopped cops from making a PCR call on the day they claimed to have witnessed the crime and report it without delay.

In most of these cases, the gap ranged from 10 days to at least a month, between which neither the police witness nor any other witnesses reported the crime that they later claimed to have witnessed.

Noting that there was a "delay of about 46 days" between when the witness first noticed accused persons indulging in violence and when he recorded his statement, a court while granting bail to one accused in a case, had said that the prosecution had failed to plausibly explain "this humongous delay in recording the statement of witness".

In the November 19 bail order of one Gurmeet Singh, the court raised doubts over the testimony of a witness, one Rafiq, asking how he could have identified Singh as a rioter when his statement was recorded nearly two months after the alleged crime.

Further stating that Singh was not arrested in the present case on the instance of any witness but was formally arrested at Mandoli Jail, the court noted that how the witness identified the accused by his face is "still anyone's guess".

In quite a few instances, even police officers have not named the accused in their initial testimonies but have gone on to name them in supplementary statements, recorded much after the incident.

Moreover, there have been around 24 cases where courts, while granting bail, have noted that the accused persons have not been arrayed in the FIR nor have they been identified by a public witness and that "no specific allegations" had been raised against them.

Significantly, there have also been at least four instances where the court has rapped police after noting that the witnesses had not named the accused in previous FIRs but had "all of a sudden identified him in the present matter" appearing to be prima facie "omnibus" or doubtful.

Another key issue the courts have had with the Delhi Police's investigation is that of arresting suspects only on the basis of "disclosure statements", taken under Section 161 CrPC, which is recorded before a police officer and is inadmissible evidence.

The alleged "disclosure" statements of accused persons or their co-accused purportedly admitting to a role in the riots have been used by police in around 15 instances.

In one of the cases where police used an alleged "disclosure" of the accused, the court observed that no public eye-witness to the incident of alleged rioting existed apart from the disclosure, "which itself carries no meaning", and granted bail.

There were also around 26 instances where bail was granted on grounds of "parity" after noting that the "role assigned to the accused and the material being relied upon is the same" as that of another accused person who has already been granted bail in a previous case.

Delhi-based lawyer Pranjal Kishore said that given the lack of evidence noted in various bail orders, "it could be extremely difficult for the prosecution to secure convictions".

"However, when you file so many FIRs and put so many people behind bars, what happens at the conclusion of the trial becomes irrelevant," he told Millennium Post.

Kishore said that by the time bail is granted, "the accused has already spent six to nine months in jail". "The process is the punishment... we constantly hear news like the accused asking for basic things inside jail like blankets and warm clothes," he said.

Significantly, the Delhi Police have cited rebukes from courts of its quality of probe in "past cases" to instruct officers to make sure such instances are avoided while probing the Republic Day violence cases this year.