Home > Delhi > N-E Delhi riots: Justice an afterthought for families of most victims still struggling to move on
Delhi

N-E Delhi riots: Justice an afterthought for families of most victims still struggling to move on 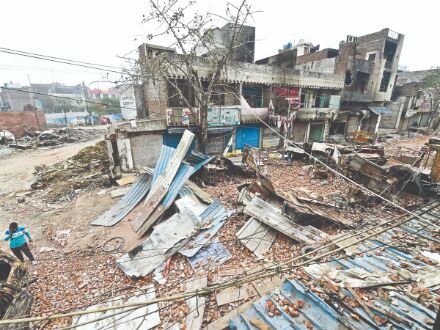 New Delhi: One year after the north-east Delhi riots that killed over 53 and injured nearly 600 others, the families of those murdered in the violence have evolved a varied set of defence mechanisms to help them deal with the next steps of continuing their lives — from giving up on the criminal justice system to having unwavering faith in the judiciary and even developing anxiety, fear and paranoia as natural responses to situations requiring frequent interactions with the authorities.

Millennium Post spoke to the families of dozens of victims as part of its series on the one year since the riots and found that while some struggle and others find a way to bury the memories, the one thing these families have in common is that their scars are here to stay. And even if some have faith in institutions like the judiciary, most have decided to let go of justice and are struggling to find ways to continue living their lives.

27-year-old auto driver Babbu left for work on February 25 last year never to return home. "In the evening, while coming back, he was stopped by a mob at the pushta, near Khajuri circle. The mob then hit him on the head," his older brother Pappu, who is also an auto driver, said. At the time, Pappu had first managed to take him to a local hospital, from where he was taken to the Jagjivan Hospital, where doctors discharged him after stitches. But he kept bleeding from his head. "We then took him to GTB Hospital, where he died two days later," Pappu said, tearing up. Babbu and Pappu's parents are old, the family is in a tough financial position, Babbu's wife is deaf and mute and has three children to raise. The family said they no longer have the grit to follow up and pursue every update in the case.

In Mustafabad, Agha Hussain feels his son's loss deeply. "We spoke like brothers and I was very close to him. I feel as if a part of my sanity is gone with his death," he said, speaking of 22-year-old Ashfaq, who was murdered by a mob of rampaging Hindu rioters who had killed eight other Muslim men in the Brijpuri area from February 24-25. Ashfaq was married 11 days before his murder. "Whenever I think about him, I break down. I am just living my life now and I know that this is something I will carry to my grave. This pain that I feel," his mother said, adding she often has difficulty breathing. While Agha had an instrumental role in helping peace prevail in areas with temples during the riots and even right after he found out about his son's death, he now says, "I do not feel like staying here anymore." But even as Agha and his wife accept that they have forever lost parts of themselves, the family has unwavering faith in the judiciary. The Delhi Police have charged 11 men for the murders of Ashfaq and the eight other Muslims killed by the mob.

A few kilometers away, Faizan speaks of his elder brother Shahvan, who was killed on February 24. "He was one of the most non-violent persons. I sometimes cannot believe he is gone," he says. The 24-year-old was working near the Chandbagh puliya and had gone there to pick up some things when he was shot, Faizan said. But while they knew Shahvan was killed that day, they could not see his body for three days as they were stuck in Mustafabad due to rioting. Some locals from the neighbourhood had taken his body to GTB hospital, where his father identified him. "From there we directly took him to our village in Uttar Pradesh, where he is buried," Faizan said.

In the same locality, where Babu Khan now lives with the rest of his family, he tries his best to stop from breaking down while recalling the day both his sons were killed by the same mob that killed Ashfaq. Showing pictures of his battered son, Khan flinched, "They were stabbed, there were cuts on their body and face, and their bodies were burnt. I have never seen anything so brutal in my life. The zip of their pants was also open," he said. The two sons - Amir (30) and Hashim (17) - each had over 25 external injuries inflicted upon them before dying and some after death. Their post mortem reports showed most of the injuries were stab wounds and some were blunt force wounds but any one of these injuries could have been enough to kill them. "Something has died within me since. To imagine how they were burnt that how people have so much hate within them is beyond my understanding," Babu says. Amir is survived by his wife and three children, one of whom was born months after his death.

At Shiv Vihar area, 36-year-old Jamaluddin's younger brother Firazuddin is watchful, anxious and fearful. "Since the riots, it is becoming difficult to trust anyone, which is why I do not even call journalists to my place," the younger brother said. Jamaluddin and his brother had come to see the condition of their house on February 27 when they were surrounded by a mob. While Jamaluddin was beaten to death, his younger brother and eyewitness Kamaluddin managed to escape and has refused to speak up about the incident. He did not respond to multiple calls from this newspaper and has not been able to speak to the authorities as he is scared. The family is afraid and skeptical to speak up. They lost their home in the riots and said that the FIR in their case has incorrect details and that they do not believe the police will investigate properly.

At Brijpuri, 28-year-old Sunita is sitting with her newborn daughter. Her husband Prem Singh was killed by a mob on February 25 and she said she is not aware of the details of the case. All she knows, she said, "My husband went to buy milk and the next thing I came to know was that he was dead." Singh's family lives in their village, while Sunita lives alone in a small room with her four children. Hailing from a poor family, Sunita is managing life with the compensation she has received.

22-year-old Arshad or Raja for loved ones, had left his Yamuna Vihar home with a friend, who the family said is Hindu, on February 25. "He was killed at Toll Tax near Karawal Nagar. What happened there is still something we are not aware of. But according to what some told us, his friend was let go because he was Hindu," his family said. Since the riots, Arshad's family has moved back to their Loni home in Uttar Pradesh with the compensation money received from the Delhi government. "His body was in deplorable condition when we saw the picture. He was killed on February 25, but the situation was so bad that the police were not able to go there till the next day. His pants were down and the whole body had marks," Naseem Alam, Arshad's father said. Like many others, Naseem had filed a missing person's complaint, unaware that the next week he would be told of his son's death. "We used to live in a Hindu majority area before but after the riots and death of our son we have shifted to a Muslim majority area," Naseem said.