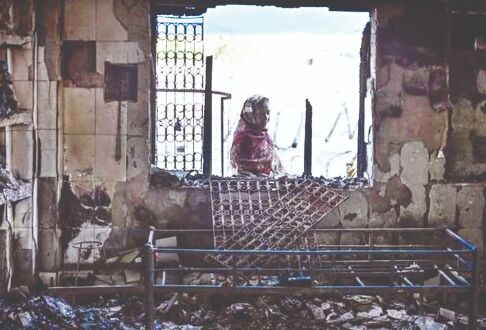 New Delhi: Even as the Delhi Police continue to insist that their investigation into the north-east Delhi riots has been fair and without favour to any one community, in the one year since then, the interactions that residents and families of the minority community have had with members of the law enforcement authority have led to a complete breakdown of trust in the institution of police itself.

Importantly, the Delhi Police has dismissed all of these allegations as "wild accusations without a basis" and refused to respond to a detailed questionnaire sent to them with regards to these allegations. They have continued to maintain that their investigation of the riots has been fair and impartial and that the data on cases registered reflected this aspect. In fact, they have said that the work after the riots had increased people's trust in them.

But for people like 37-year-old Nisar Ahmed, who lost his date godown in Maujpur Chowk, it is no longer easy to take law enforcement officials at their word. Nisar said that when he first went to get an FIR registered at the Jafrabad police station, he was asked to pay cash for his complaint to be registered. However, he later approached senior officers with a contact, who then helped get his FIR registered.

A 30-year-old Salman had appeared for a Delhi Police examination in November last year. By the end of the year, he no longer wanted to be a policeman. On December 23, his family said he was picked up by the police in one of the riots cases. His younger brother Aman claimed that they were first asked to pay Rs 75,000 to "lighten the case" against him and after negotiating, they claimed they paid Rs 30,000, after which some charges against him were dropped, the family alleged.

Salman has become much quieter now, according to his mother and Aman said his resolve to become a policeman has become stronger so that he can "set an example".

In Chand Bagh, Rubina Bano, who was part of the anti-CAA protest site in the area till before the riots, has claimed that she had seen police officials beat up protesters during the riots, including herself on February 25. She said she was three months pregnant at the time. "I was choking (due to teargas) when a few policemen surrounded me. They were wearing uniform. The next moment I know they were beating me. I fell on the road and they started beating me again." She went on to say that the last thing she remembered was being hit with a brick on the head before waking up at Al-Hind hospital.

Rubina has three children and said that the police almost arrested her 15-year-old son because he was seen holding a bat on February 24 in CCTV footage. She said he had gone to play cricket. She added that she receives calls from men claiming to be police, asking her to take back her statement against police officials. She is represented by advocate Mehmood Pracha.

Trusting the police is also not easy for the family of 32-year-old Maruf, who was killed by a mob on February 25, in front of his brother Harun, who recalled witnessing his brother's murder and his experience with the police with much pain. In much detail, he recalled the chain of events on the day Maruf was killed, even remembering names of people he could identify from his neighbourhood in Gondi. But he says none of what he had told the police was reflected in the FIR registered for his brother's murder when he managed to get a copy. "When I told this to them they said things like you all have to live here, why create unnecessary problems for each other. He also asked me to sit with them and find a solution," he said.

Harun went on to say that the people he had named were finally detained in May but an official from the Bhajanpura police station soon called them to the station and left them alone with the accused in a room with one slim partition. He said that they were then taken to speak to senior officers, who asked them why they had filed a complaint two months later. Harun explained that they had filed a complaint earlier but was told it would be of no use. "We then came back home and the same day those men were also released... The accused live in the adjacent street and I see them every day. I am threatened by the accused and their family every day and the police have not done any investigation. My brother's killers roam free," he claimed.

In other cases, like that of Brijpuri's Mohammad Arif, who has been charged with murdering three Muslim men, including his uncle, the family's already scarce trust in the police has vanished. The police have accused Arif of disguising himself as a Hindu rioter to "protect himself" and joining the Hindu mob in beating three men to death.

Parveen, Arif's mother, told Millennium Post that the police had come to arrest her son in multiple cases before, none of which had amounted to much. When the police again visited their home in April last year, Parveen said the officers assured her nothing would happen to him. "They said they do not have any evidence against him and just want to question him to help with the investigation. The next thing we knew he was arrested for murder," she said.

After Millennium Post first reported the Delhi Police's far-fetched theory and several other news portals highlighted it, Arif was granted bail in all three murder cases when advocate Abdul Gaffar had taken up his case. Courts said the police's theory seemed unlikely and added that apart from sketchy CDR data, they had no technical evidence to arrest him.

More recently, news website Newslaundry reported that Arif's family was not able to gather the money for his bail bonds worth Rs 60,000, following which Gaffar was able to raise the money through crowdfunding.

But it has never been more difficult for Arif's family to trust the police.

In addition to this, dozens of people who spoke to this newspaper have said that the police had been particularly uncouth, rude and unnecessarily violent with them whenever they went with their grievances related to the riots, making it all the more difficult for them to believe that the law enforcement authority was going to protect them.

This is the sixth part in Millennium Post's series on the one year since the north-east Delhi riots.