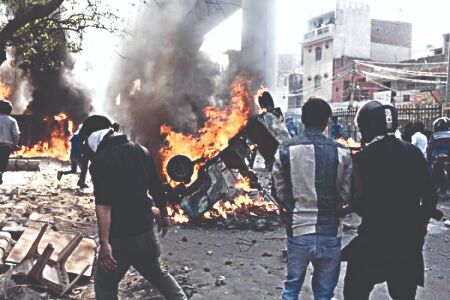 New Delhi: Every time the Delhi Police has been accused of conducting a shoddy probe into the north-east Delhi riots of February last year, one of their go-to defence mechanisms has been to assert that all arrests and probes are being conducted strictly according to the law and based on "technical evidence".

The police have said they have used facial recognition software, call detail records, geo-location services, dumped data of phones and even asserted that they have made 231 arrests based on CCTV and video footage.

But according to Millennium Post's review of 100 bail orders of the total over 3,500 bails granted so far, the police had cited CCTV and video footage in at least 44 cases to back their allegations against the accused, of which in 32, the video footage did not stand up to basic judicial scrutiny and the accused were granted bail.

In more than half of these cases, a piece of crucial electronic evidence used by police to corroborate video evidence — Call Detail Records (CDR) of the accused — are either missing from the prosecution's case or failed to show the alleged crime being committed by the accused.

Another problem that the police have run into with the CDR evidence is that many of the crime scenes were found to be very close to the homes of the accused, as a result of which CDR — which can point location that is accurate only up to a point — has been called inconsequential in many cases.

Apart from submitted CCTV or video footage not identifying the accused specifically or showing them from behind or with their faces covered or plainly having no sign of the accused, video evidence in at least 10 cases Millennium Post analysed, was from a day before the day of the actual crime. There have also been cases where the video footage presented by police was not of the crime scene but that of "around the place of occurrence".

For instance, while granting bail to one Anwar Hussain, accused in a murder case, the court noted that the police had submitted CCTV footage from a day before the actual incident on February 24 which was neither "clinching" nor "incriminating" evidence against the accused as claimed by the prosecution.

In the case of one Deepak Tomar, accused of vandalising a shop in West Jyoti Nagar, the police presented "video evidence" against him that was from an FIR registered at the Welcome police station.

The Delhi Police claim there were over 670 CCTV cameras in north-east Delhi during the riots, of which around 301 were active. Apart from this, 152 cameras installed with MPLAD funds were found non-functional in an August 2020 audit. 72 of these were said to have been damaged in the riots and 80 had torn fiber cables or other accessories non-functional - likely from before the riots, as per their claims.

In addition to all the footage from working CCTV cameras, when asked whether CCTV cameras damaged during riots helped them, one senior official close to the investigations said that they had found a way to access the DVRs of these cameras and had scanned that footage as well.

"Some bodies were burnt and were beyond recognition. Faces were identified through the superimposition of the skull on the photographs," one official said.

"Extensive use of technology in identification and arrest was a hallmark of the probe. This helped us to build the credibility of the investigation and counter false propaganda of groups having vested interest, who wanted to derail the probe," another senior police official said.

Yet, as recently as last week, the Delhi High Court while granting bail to three men accused of murder, noted that the police theory seemed like "conjecture" and was "not based on scientific fact".

In a similar case, a local court had last year granted bail to an accused in another murder case, whose religion was incorrectly recorded as Hindu in the chargesheet that went on to accuse him of murdering his own uncle. There was no video material against him and CDR evidence was ruled inconsequential by the court.

While the quality of the technical and video evidence will have its day in court, Senior Advocate Colin Gonsalves told Millennium Post that "video evidence in the form of CCTV cameras in the foundation of any case and if itself is faulty, it shows how sloppy the investigation is".