Home > Delhi > Mapping the 2020 Delhi Riots: How, when and where it began & why it is missing from the police's theory
Delhi

Mapping the 2020 Delhi Riots: How, when and where it began & why it is missing from the police's theory 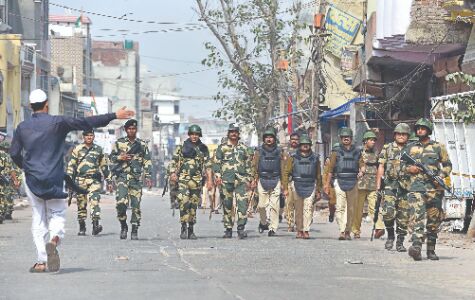 New Delhi: Despite arresting hundreds of people based on flimsy evidence and nonsensical investigative theories as demonstrated by multiple court records and seriously compromising the quality of investigation in hundreds of the 755 FIRs filed in connection with last year's north-east Delhi riots, the Delhi Police have been able to continue unabated in their probe into the "main conspiracy" behind the riots — accusing prominent civil society leaders and anti-CAA activists of allegedly "engineering" the riots by organising protests and purportedly instigating violence against themselves.

But as part of its investigation on the one year since the riots, Millennium Post mapped how the riots began and found that anti-CAA protest sites saw targetted attacks starting from the one at Maujpur on February 23 and that the violence spread towards the north and north-west, consuming the entire district neighbourhood by neighbourhood, according to interviews with dozens of eyewitnesses, chargesheets filed by the Special Cell in the "conspiracy" case, transcripts of BJP leader Kapil Mishra's police questioning and contents of the WhatsApp group chat of Delhi Protests Support Group (DPSG), which was also collected by the police as evidence.

Despite having evidence with respect to when and where they actually began, the Delhi Police have chosen not to address the flashpoint of the riots — Maujpur.

While on the one hand, the Delhi Police are having trouble deciding when the alleged "conspiracy" to incite the riots was hatched, on the other, the violence on February 23 at Maujpur — hours after BJP leader Kapil Mishra's controversial speech — does not figure in their "chronology of events" and the police have now insinuated that the riots began the next day in Chand Bagh.

But by then, Maujpur, Babarpur, Kardampuri and Kabir Nagar were already burning.

Barely one hour after BJP leader Kapil Mishra left from the Jafrabad protest site after making his controversial speech on Sunday (February 23) afternoon, around one kilometre south of the Maujpur-Babarpur Metro station, videos emerged on social media of trucks filled with stones gathering in Maujpur, the first of the violence had broken out in the form of pro-CAA agitators hurling stones at anti-CAA protesters near the Maujpur-Babarpur area — dismantling the protest site, and further north, people at another anti-CAA sit-in on the Kardampuri bridge sat nervous, hearing about a rioting mob coming their way after having dismantled the Maujpur site.

According to the transcript of the questioning of Mishra by the Delhi Police attached in the first "conspiracy" chargesheet, the BJP leader left the protest site in Jafrabad around 4:35 pm. Within one hour of this, almost all of Kardampuri and Kabir Nagar were out on their terraces watching the violence unfold.

Zhiyauddin, a PhD researcher at the Delhi University and formerly from Jamia Millia Islamia, who lives in Kardampuri, recalled the late afternoon sun on his terrace on February 23 and the screams of people he and his family could hear, amid nervous phone calls from relatives living close by.

"The pro-CAA mobs started pelting stones near the Maujpur Chowk under the Maujpur-Babarpur metro station and started moving north towards our colony in Kardampuri. We could hear the screams of people from our terrace as we watched the mobs try and move towards us," another resident, Moinuddin, said, adding that protesters at the Kardampuri bridge sit-in were already getting nervous by this point.

Many people were fleeing from the protest site fearing violence and some others kept coming back to check if everything was alright throughout the night of February 23, another eyewitness to the riots and a resident of Kabir Nagar, Zulfikar said, adding the mobs were unable to reach Kardampuri that night.

The following day, the mobs gathered at Maujpur Chowk again and started moving towards the Kardampuri bridge protest site, which was almost emptied out after many protesters fled. By 4 pm on February 24, the protest site was set on fire and the bridge being blocked by the protesters had turned into a battlefield.

From Maujpur, the rioting spread to parts of Yamuna Vihar, Kabir Nagar, Vijay Park and Kardampuri areas, following which the violence fanned out in the north-west direction to Bhajanpura and Chand Bagh areas, before enveloping areas like Mustafabad, Brijpuri and Shiv Vihar by the night of February 24 and early February 25.

While the Delhi Police have devoted voluminous pages to transcripts of the WhatsApp group of DPSG where members were seen discussing how anti-CAA protests should be organised for maximum impact and given thousands of more pages on how this "proved" their alleged "conspiracy", the very same chats transcripts have evidence of how and when the rioting began in Maujpur but in the chronology of events presented by the police in its chargesheet, this instance of rioting does not find a mention.

In addition to a lawyer alerting DPSG members of ongoing violence in Maujpur Chowk, the group chat also had members sharing the first few videos of the riots from Maujpur where vehicles can be seen burning.

By Mishra's own admission, he left the Jafrabad area at 4:35 pm on February 23 and at 5:38 pm, the DPSG member posted a message in the group chat saying locals and anti-CAA protesters in the Maujpur area were being pelted with stones by pro-CAA agitators. Some members initially contended this information but by the night of February 23, the first videos of rioting from Maujpur emerged and were shared on the group chat.

Significantly, what the police did have to say about how the riots began pertained to the events of February 24 in Chand Bagh and Wazirabad areas. The Delhi Police in their third chargesheet in the "conspiracy" case indicate that this is where the riots began and allege that anti-CAA protesters had used a juvenile to disarm CCTV cameras in the area with the purported intent of indulging in violence.

However, the problem here is that eyewitnesses who were at the anti-CAA protest site in Chand Bagh and those who had documented the violence on February 24, allege police complicity, brutality and inaction in the area. For instance, 35-year-old Rubina Bano, a resident of Chand Bagh and an active participant at the anti-CAA protest site there, said that she was "brutally beaten up by men in uniform".

Rubina said, "On February 24, at about 11 am, suddenly police started lathicharging and detained a few boys, who were later released. We started protesting again when around 12 pm, police suddenly started lathi-charge and resorted to tear gas shelling. Everyone started running here and there. There was a mob of hundreds of men who had come."

A photojournalist, whose credibility was established when his footage formed the basis for the bail of three accused in a rioting case from that day, told Millennium Post that on February 24, the police had allegedly joined the mob near Mohan Nursing Home and participated in stone-pelting protesters.

But while the Delhi Police sits on enough information to begin investigating how the riots began in Maujpur, including information that could incriminate right-wing Hindu extremists such as Ragini Tiwari, if it does decide to publicly acknowledge how the riots began, its theory of anti-CAA activists and DPSG members allegedly "conspiring to incite riots" will fall flat as chat transcripts clearly show key members of the group trying to discuss ways to de-escalate communal tensions quickly erupting in the area.

Maujpur-Babarpur: On Feb 23, the rioting began at Maujpur Chowk under the Maujpur-Babarpur Metro station by pro-CAA mobs led by the likes of Ragini Tiwari. The rioters moved north with the intention of infiltrating Kardampuri and Kabir Nagar but were unsuccessful that day. This rioting started a little over an hour after BJP leader Kapil Mishra's controversial speech at Jafrabad

Kardampuri-Kabir Nagar: On Feb 23 and 24, residents inside Kardampuri and Kabir Nagar panicked and watched from their terraces as the pro-CAA mobs tried to move into their lanes from Maujpur. While the rioters were unable to enter the inner lanes of the colonies, they managed to burn shops, homes and vehicles in the outer regions. By Feb 25, residents saw no sign of the police helping them and started to arm themselves with Molotov cocktails, swords and meat hooks

Chand Bagh & Bhajanpura: On Feb 24, the protest site at Chand Bagh was dismantled violently by law enforcement officials starting from around 11 am. Police repeatedly lathicharged protesters throughout the afternoon, as per multiple eyewitnesses. The police version for the area on that day says CCTV cameras were destroyed by anti-CAA protesters. But residents have said this was the day the police allegedly joined rioters in pelting stones at anti-CAA protesters

Wazirabad: On Feb 24, unfamiliar faces showed up at the Wazirabad anti-CAA protest site and started threatening protesters and breaking protest equipment. Soon, local property dealers came to the protest site at Gali number 9 with the police and forcibly vacated the protest site, 25-year-old Shahryar Hussain, a resident and member of the protest, said. Other residents of the area remembered intense police patrolling on Feb 24 night — after news of head constable Rattan Lal's death near the area broke

Mustafabad: On Feb 25, old Mustafabad erupted in violence, with what eyewitnesses called "Hindu mobs" launching a violent attack against the protest site on the Mustafabad main road cutting through Brijpuri. Khursheed Saifi, who was helping organise the protest said around 4 pm, the mobs of pro-CAA agitators arrived and pelted stones and petrol bombs at them as the police were nowhere to be seen. Khursheed was injured and has now lost one eye

Jafrabad: On Feb 25, the Jafrabad anti-CAA sit-in protest site was also attacked and dismantled by the police, according to multiple reports. While the crowd at the site had swollen after reports of police brutality in Hauz Rani a couple of days ago, the police cracked down against them with what they called 'mild force.

This Millennium Post series reports stories that highlight the nuances of how the north-east district has changed, what level of distrust has been sown into the community, how policing has changed in the area, how or whether the victims are coping, the problems they are facing with the criminal justice system and the problems police, prosecutors and defence lawyers are having to deal with in courts -- One year after the north-east Delhi riots that killed at least 53 people and injured nearly 600 others. The other parts of the series can be found here: