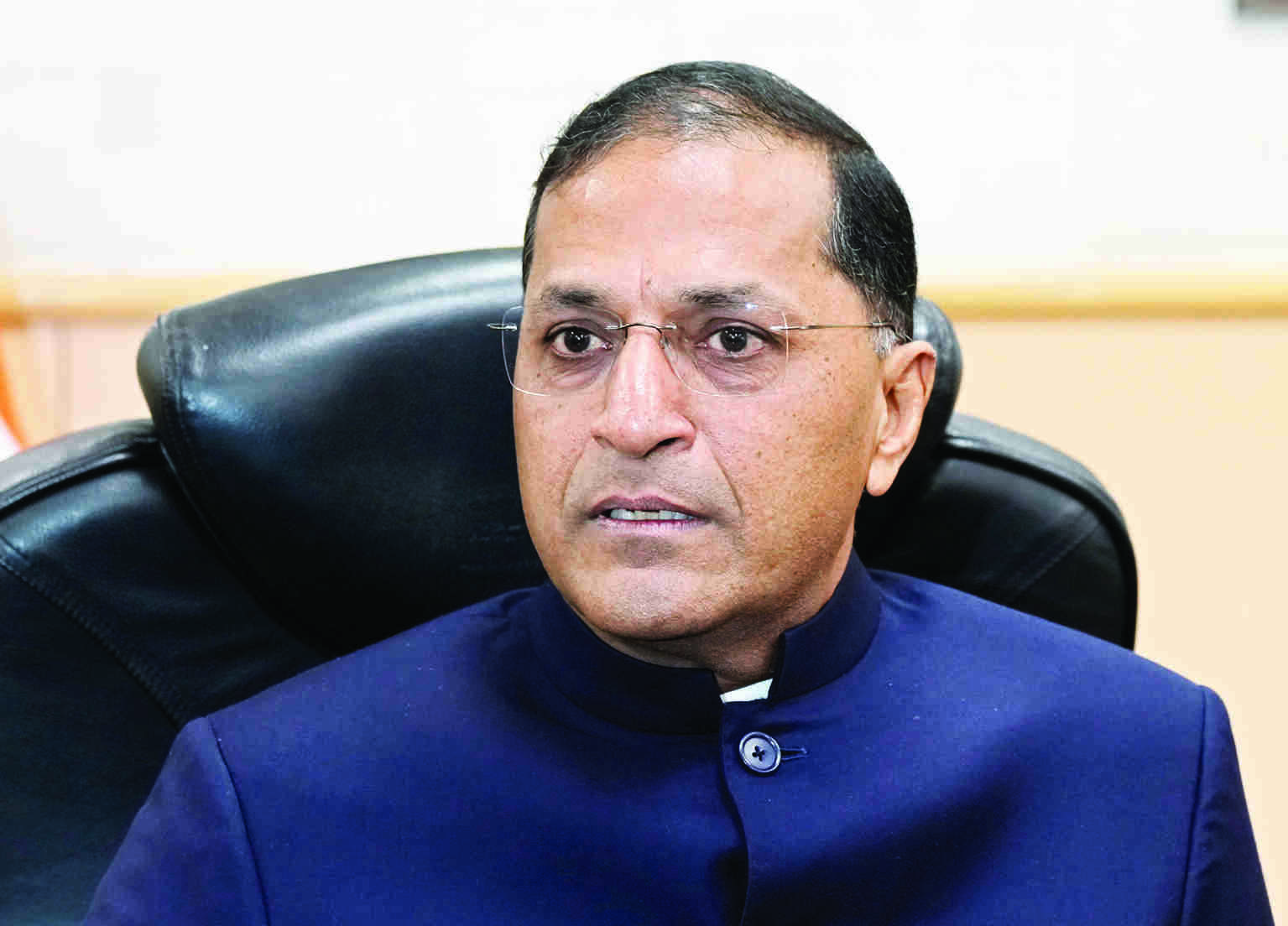 New Delhi: The Supreme Court on Thursday questioned the "haste" and "tearing hurry" with which the Centre appointed ex-bureaucrat Arun Goel as an Election Commissioner, saying his file travelled at "lightning speed" within departments in 24 hours.

The Central government vehemently resisted the observations, with Attorney General R Venkataramani contending the whole issue pertaining to his appointment needed to be looked at in entirety.

The top court asked how the Union Law minister shortlisted a panel of four names that was recommended to the Prime Minister for appointment as Election Commissioner when none of them would have completed the stipulated six-year tenure in office.

At the outset, a five-judge Constitution bench headed by Justice K M Joseph perused the Centre's original file pertaining to Goel's appointment and said: "What kind of evaluation is this? Although, we are not questioning the merits of Arun Goel's credentials but the process."

As the bench questioned the "lightning speed" with which Goel was appointed as an EC without his file even moving within departments for 24 hours, Venkataramani, the government's law officer, vehemently urged the bench not to make observations without looking into the entire issue of the appointment process.

Justice Joseph said the court heard the matter on November 18, and on the same day, the file was moved and the prime minister recommended Goel's name to the president. "Why this urgency?" he asked.

Justice Ajay Rastogi, also part of the bench, told the Attorney General (AG), "The vacancy in the Election Commission happened on May 15. Can you show us from the records that from May 15 to November 18 what was done? What prevailed upon the government that the appointment was made so fast in one day?

"Same day the file was processed, same day clearance, same day application and same day appointment. File has not even travelled for 24 hours. Why was the file cleared with lightning-fast speed?" he said.

The AG replied many appointments have happened within 24 hours or even 12 hours.

"There is no trigger point. There is a process which has been adopted. This is the convention which has been followed for decades," Venkataramani said.

Lawyer Prashant Bhushan, appearing for petitioner Anoop Baranwal, attempted to make submissions before the bench when the AG was arguing, provoking the government's law officer.

"Please hold your mouth for a while," he curtly told Bhushan.

The bench, also comprising Justices Aniruddha Bose, Hrishikesh Roy and CT Ravikumar, after perusing the file and the note of the AG said a panel of four names was prepared by the Law ministry from the vast pool of officers.

"We want to know how exactly you select a particular name. Let me be blunt. Suppose, if all these four names are carefully chosen as 'yes man'. We don't have anything against any individual. We should clear the air at the outset. We are not on a mini-trial. This man (Goel) has an excellent academic record but we are concerned with the process of appointment," Justice Joseph said, adding Goel was the youngest among the four names recommended by the Law ministry. After the arguments, the top court reserved its verdict on a batch of pleas seeking a collegium-like system for the appointment of ECs and the CEC and asked the parties to file written submission in five days. Under the Election Commission (Conditions of Service of Election Commissioners and Transaction of Business) Act, 1991, an EC can have a tenure of six years or up to the age of 65, whichever is earlier.

Justice Bose pointed out to Venkataramani that from the record it appears Goel's voluntary retirement from service, the related notification, and his appointment were all done in a single day.

The AG replied it could be a coincidence, and as far as VRS is concerned, Goel was from the Punjab cadre of the IAS and the state government had to grant the permission.

"It is normal, My Lord. He was anyway going to retire in December. Goel's profile is important and not the VRS, which is being made an issue," the AG said.

Justice Joseph asked Venkataramani to tell the court how the panel of four names was prepared and said: "As per law, the CEC should be appointed for six years. Now, CEC is to be appointed from amongst the ECs. So that means you need to appoint a person on that basis that he gets that much time. Now, what has been done is contrary. None of the officers in the panel were to complete six years."

Venkataramani urged the court not to open that debate, saying: "This is a larger debate. I am ready to open it. Are we going to question every small step of the executive?"

Interestingly, the list of bureaucrats the Union Law ministry recommended to the PM for picking an Election Commissioner did not have the name of even one person who could complete the stipulated six-year tenure at the poll panel, the Supreme Court said on Thursday.

A five-judge Constitution bench headed by Justice KM Joseph wondered was the government not closing the doors on meritorious younger candidates by appointing retired bureaucrats.

"There is a law. We expect that you would act in such a way that you would comply with the statutory requirements. Why is it that you will have a pool of retired bureaucrats, why not others? Why only four names, why not have a larger pool of candidates?

"Are you not shutting out the meritorious younger candidates? You seem to be hell-bent that no Chief Election Commissioner or for that matter EC gets a complete six years tenure and it is against the statute," Justice Joseph said.

Under the Election Commission (Conditions of Service of Election Commissioners and Transaction of Business) Act, 1991 an EC can have a tenure of six years or up to the age of 65, whichever is earlier. Justice Joseph said the point is that from the pool of a large number of officers the government has selected only those people who are never going to complete the six-year tenure.

"Why were the names sent to the Prime Minister and not the Council of Ministers?" Justice Joseph asked.

Attorney General R Venkataramani responded: "Batch is one criteria, date of birth is other, seniority from the batch is other. Similarly, there are several other aspects which are being considered. Several discussions are done. Everything is not in black and white. There are several ways of appointment. Some files go to the Appointments Committee of Cabinet (ACC) through the Cabinet secretariat and some go directly to the Prime Minister".

The bench, also comprising Justices Ajay Rastogi, Aniruddha Bose, Hrishikesh Roy and C T Ravikumar, clarified there should not be any misunderstanding that the court is against the government and it is only debating and discussing the issue.

The AG replied: "Yes, My Lord. It is a debate and I am bound to answer the court's questions. If we start doubting every appointment, look at the implications for institution's reputation".

Justice Joseph said: "So, ultimately your point is that only those people need to be appointed who are on the verge of retirement, so that they don't get a full six-year period. Is that the law? You are violating the law and we are saying that clearly".

The bench said it is not questioning or scrutinising the names but the process, and from the database the government has given, it appears there are several other officers who are younger.

On Wednesday, Goel's appointment as an EC came under scrutiny by the top court which had sought from the Centre the original records pertaining to his appointment for perusal, saying it wanted to know whether there was any "hanky panky".

The top court, which had rejected the Centre's objections to its order for producing the original file, had said it wanted to know whether everything was "hunky dory" in the appointment process as claimed by the government.

On November 19, Goel, a Punjab cadre IAS officer, was appointed as Election Commissioner.

Goel would be in line to be the next CEC after incumbent Rajiv Kumar demits office in February 2025. His total tenure in the Election Commission would be of over five years.

He will join Kumar and Election Commissioner Anup Chandra Pandey on the poll panel.

There was a vacancy in the Election Commission (EC) following the retirement of previous CEC Sushil Chandra in May.

Goel was the secretary in the Ministry of Heavy Industries till recently and his voluntary retirement came into effect on November 18. He has also served in the Union Culture ministry.