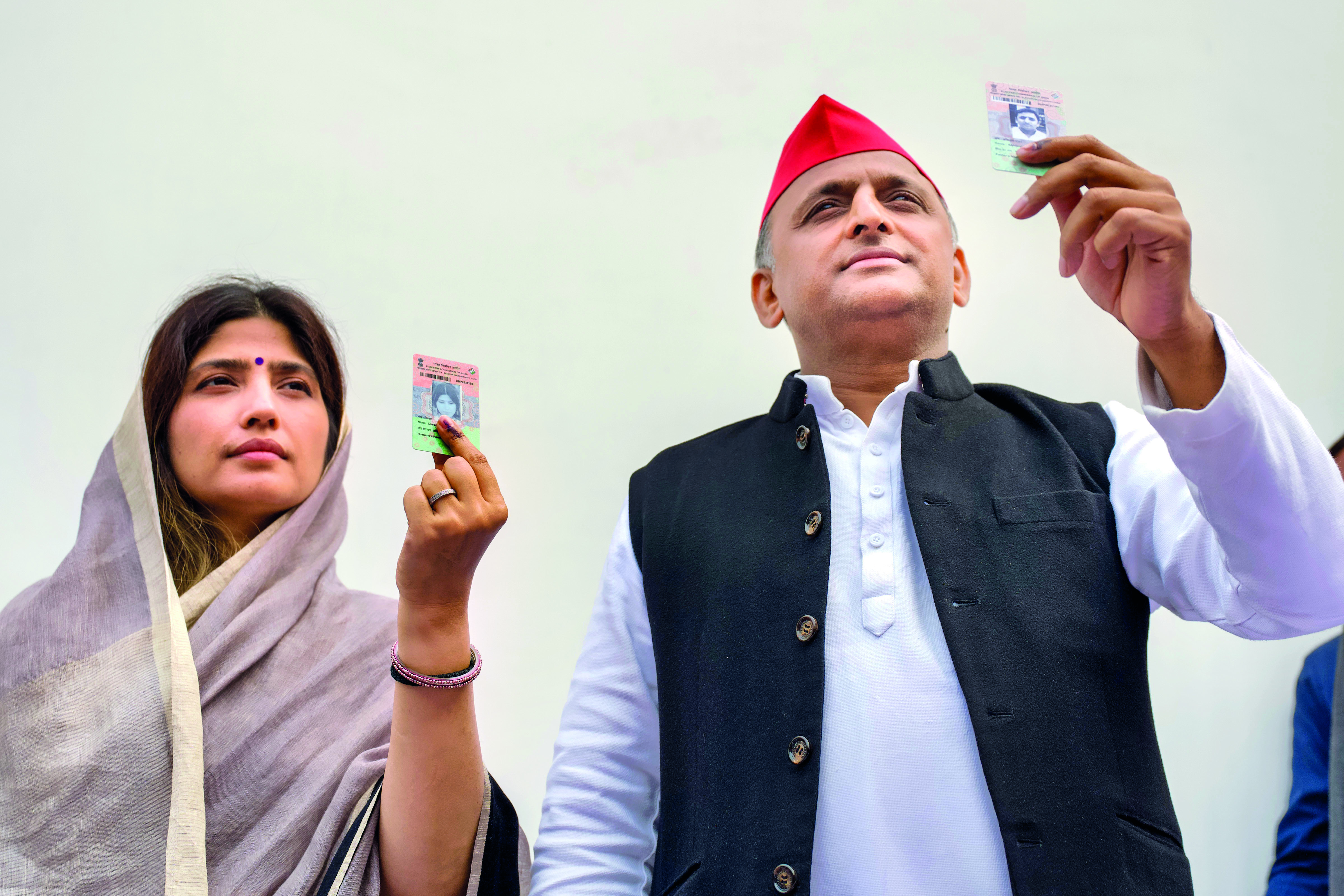 New Delhi: Moderate polling was recorded till noon in the bypoll to six Assembly constituencies in five states and the Mainpuri parliamentary seat in Uttar Pradesh on Monday amid complaints of glitches in EVMs and allegations by the Samajwadi Party that the police and administration were preventing people from casting vote.

Rampur Sadar and Khatauli in Uttar Pradesh, Padampur in Odisha, Sardarshahar in Rajasthan, Kurhani in Bihar and Bhanupratappur in Chhattisgarh are the assembly seats where the bypolls are being held.

All eyes are on the Mainpuri seat which was represented by Samajwadi Party patriarch Mulayam Singh Yadav five times in the past. The election is a battle of prestige for Akhilesh Yadav whose wife Dimple Yadav is contesting the polls. She is pitted against BJP's Raghuraj Singh Shakya.

EC officials said about 19 per cent of the voters exercised their franchise till 11 am in Mainpuri, while Rampur Sadar and Khatauli assembly seats saw 11.3 and 20.7 per cent polling respectively.

As the voting progressed, both the SP and BJP hurled allegations against each other.

The SP alleged use of police force and also charged that officials on election duty were preventing people from casting their vote.

The BJP also alleged on Twitter that in some booth in Mainpuri, "unscrupulous elements of SP" were preventing people from casting their votes and sought the EC's intervention. A party delegation also met the UP CEO and handed him over a memorandum.

BJP state president Bhupinder Singh Chaudhary trashed the allegations, and said the SP will taste defeat on all the three seats.

The bypoll to the Mainpuri Lok Sabha seat is taking place due to the death of Mulayam Singh Yadav, while the bypolls in Rampur Sadar and Khatauli were necessitated after SP MLA Azam Khan and BJP MLA Vikram Singh Saini were disqualified following their conviction in separate cases.

In Odisha's Padampur, over 29 per cent polling was recorded in the first four hours of voting.

The bypoll assumes significance in the wake of the BJD's loss in Dhamnagar, its first such defeat since 2009, with many in political circles claiming that the result would also indicate if electoral scales were tilting against the Naveen Patnaik-led party ahead of the 2024 state elections.

Bypoll to the assembly segment falling in Muzaffarpur district has been necessitated by the disqualification of RJD MLA Anil Kumar Sahani. Altogether 13 candidates, including five Independents, are in the fray.

In Chhattisgarh, an average voter turnout of 9.89 per cent was recorded till 9 am in the by-election to Bhanupratappur Assembly seat in Kanker district.

Seven candidates are in the fray for the bypoll in the constituency, which is reserved for Scheduled Tribes, though it is largely seen as a direct contest between the ruling Congress and the BJP.

The bypoll has been necessitated due to the death of Congress MLA and state Assembly's Deputy Speaker Manoj Singh Mandavi on October 16. The Congress has fielded his wife in the bypoll. Sarva Adivasi Samaj, an umbrella body of tribal communities in Bastar, has also fielded its candidate, former Indian Police Service Officer Akbar Ram Korram, who is contesting as an Independent.

In Rajasthan, nearly 20 percent voting was registered in the first three hours of polling in Sardarshahar seat in Churu district.

A total of 2,89,843 voters are eligible to exercise their franchise in the bypoll in the assembly constituency, necessitated following the demise of Congress MLA Bhanwar Lal Sharma, who passed away on October 9 after prolonged illness. The Congress has fielded the late MLA's son Anil Kumar while former MLA Ashok Kumar is the BJP candidate.

While polling began at 7 am in Uttar Pradesh, Odisha and Chhattisgarh, in Rajasthan it started at 8 am. The counting of votes will be taken up on December 8.