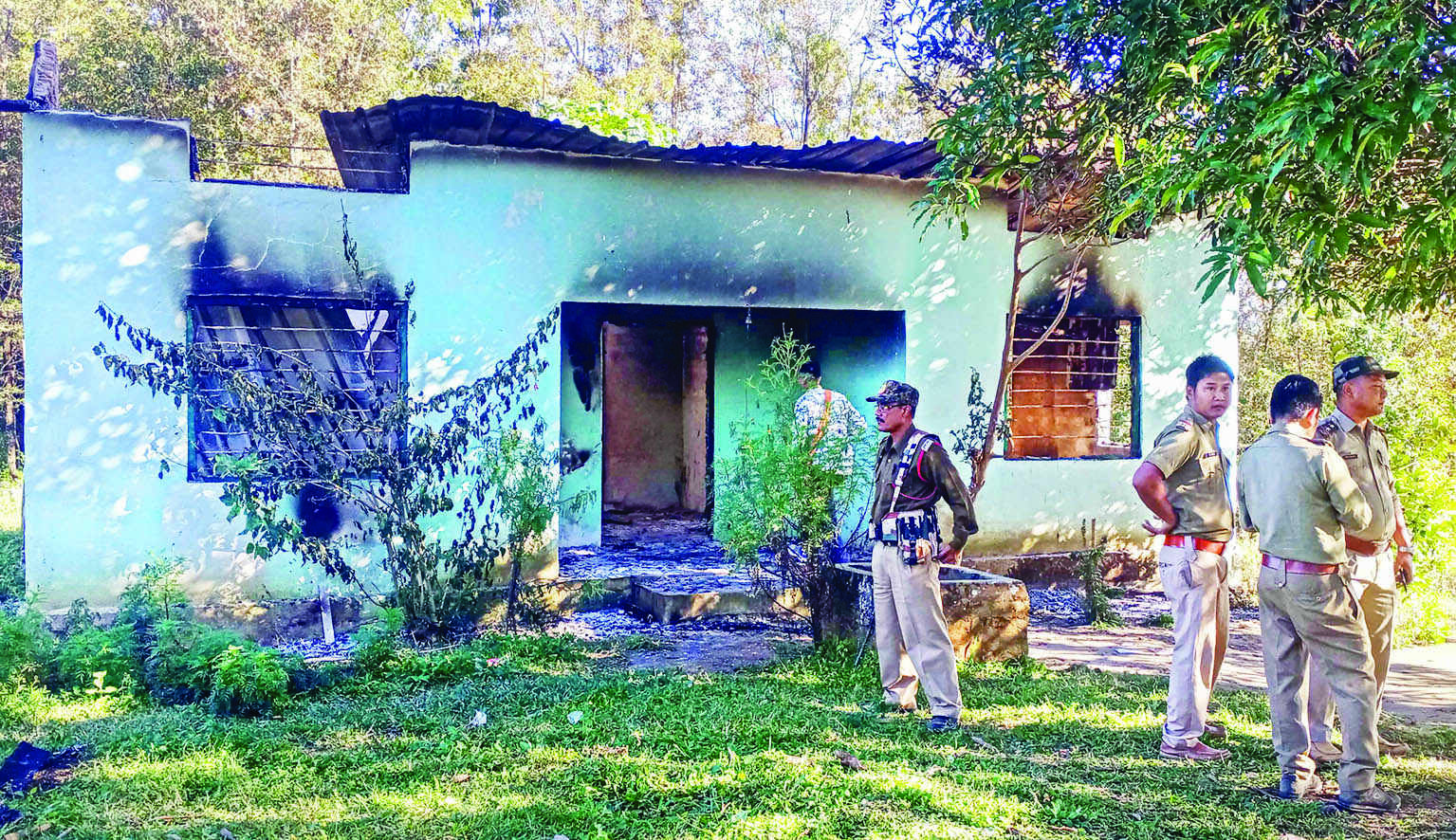 Mukroh/ Guwahati: A group of villagers from Meghalaya allegedly vandalised and burnt down a forest office in Assam's West Karbi Anglong district, following the killing of six people in violence that occurred in a disputed area along the border between the two states, officials claimed on Wednesday.

At least two vehicles — one in Mukroh village where the violence took place on Tuesday and another in Meghalaya's capital Shillong — were set ablaze by a mob, they said.

Armed with machetes, rods and sticks, residents of the village allegedly gathered in front of a beat office under the Kheroni Forest Range in Assam along the inter-state border on Tuesday night and set the structure on fire, the officials said. The mob vandalised the forest office and torched properties such as furniture, documents and motorcycles parked in the complex, one of the officials said.

However, no injury to the forest personnel posted there has been reported so far, he told a national news agency.

The villagers had left the area before a team of Assam policemen and other security personnel reached the spot, he said. An Assam government vehicle that was found abandoned at Mukroh village was torched by locals, another official said.

The influential Khasi Students' Union took responsibility for the torching of the forest beat office and the Assam government vehicle at Mukroh and alleged that the MDA dispensation in Meghalaya failed to protect its citizens.

Members of the students' union held demonstrations at the Ialong Civil Hospital where the bodies of all the six people were brought for post-mortem examinations and demanded that those responsible for the killing be handed over to the Meghalaya Police.

Following reports of attacks on vehicles from Assam in Meghalaya, the Assam Police continued to advise car owners to avoid entering the neighbouring state for safety.

At various points to enter Meghalaya from Assam, including at Guwahati and Cachar district, the police personnel put up barricades and asked people not to travel to the hill state in a vehicle bearing a number plate from Assam.

"Since yesterday, we have been advising people not to go to Meghalaya till the situation completely normalises. We are only requesting the private and small car owners not to travel as miscreants are targeting such vehicles there," Deputy Commissioner (East) of Guwahati Police Sudhakar Singh told the news agency.

He, however, said the commercial vehicles have not been stopped as of now.

Sources told the news agency that a car with an Assam number plate was burnt in Shillong on Tuesday evening after miscre-ants asked the passengers to leave the vehicle.

Some taxi drivers, who returned to Guwahati on Tuesday night and Wednesday morning, said the Meghalaya Police escorted them to the border, but still, their vehicles were pelted with stones by onlookers while on the move.

Cachar Superintendent of Police Numal Mahatta said they asked passengers of vehicles from Assam and other states not to travel through Meghalaya as per requests from the hill state.

"The Meghalaya Police had requested us to control vehicles going inside their state following the disturbances. Restrictions have been put in place as a precautionary measure for the safety of the people," he added.

Six people, including a forest guard, were killed in violence at a disputed area on the Assam-Meghalaya border in the early hours of Tuesday after a truck allegedly laden with illegally felled timber was intercepted by forest guards from Assam.

The Meghalaya government suspended mobile internet services in seven districts, while the Assam Police sounded alert in the border districts and also ordered an inquiry by a retired high court judge into the matter.

Assam Police officials, however, asserted that the truck was intercepted in West Karbi Anglong district of the state by a for-est department team and a mob from Meghalaya had later attacked the forest guards and policemen from the state, which led to firing by the Assam side to bring the situation under control.

Five of the six killed at Mukroh village were Meghalaya residents and one is an Assam forest guard, Sangma said.

The Meghalaya CM announced an ex gratia of Rs 5 lakh each for the next of kin of the deceased.

The Assam government too said that it will provide Rs 5 lakh to the families of each deceased as compensation.

A team of Meghalaya ministers will meet Shah on November 24 to seek a central agency probe into the matter.

The Assam government, however, said that it will hand over the probe to a central or neutral agency.

The Himanta Biswa Sarma government in Assam also said it has transferred the district SP and suspended the officer-in-charge of Jirikinding Police Station and the Forest Protection Officer of Kheroni range.

The two states have a longstanding dispute in 12 areas along the 884.9-km-long inter-state border, and the location where the violence took place is one of them.

The two north-eastern states had signed a memorandum of understanding in March this year in the presence of Shah in New Delhi towards ending the dispute in six of them.

Meghalaya was carved out of Assam in 1972 and had since then challenged the Assam Reorganisation Act, 1971, which had demarcated the border between the two states. WITH AGENCY INPUTS